Just us and the Droids

For most of us middle aged boomers, Star Wars was the first special effects movie of its kind. The plot and dialog were hokey, but the ideas of The Force, hyperspace, light sabers, and the rescuing of a kingdom and a princess appealed to the mythical hero lover in us all. Little did we realize at the time that this story and its sequels would not only transform our generation, but that its reruns and prequels would transfix the generation to follow. So it was with great delight that a small LAGLS contingent thoroughly explored the Star Wars: Where Technology Meets the Imagination exhibit this past March at the California Science Center. We got to see Luke Skywalker’s little desert hover craft and build an electromagnetic propulsion car out of LEGOS and magnets. We got to read about the sociology and anthropology of the various planets. We got to manipulate robotic legs to learn how hard it is to make a bipedal droid. We saw an interview with a sound specialist who explained how he concocted the sound of the Millenium Falcon entering (or failing to enter) hyperspace. We even had our picture taken with some of the cast (photo below). Didn’t get their autographs, though. Sorry. 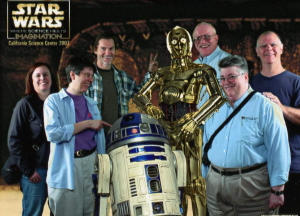